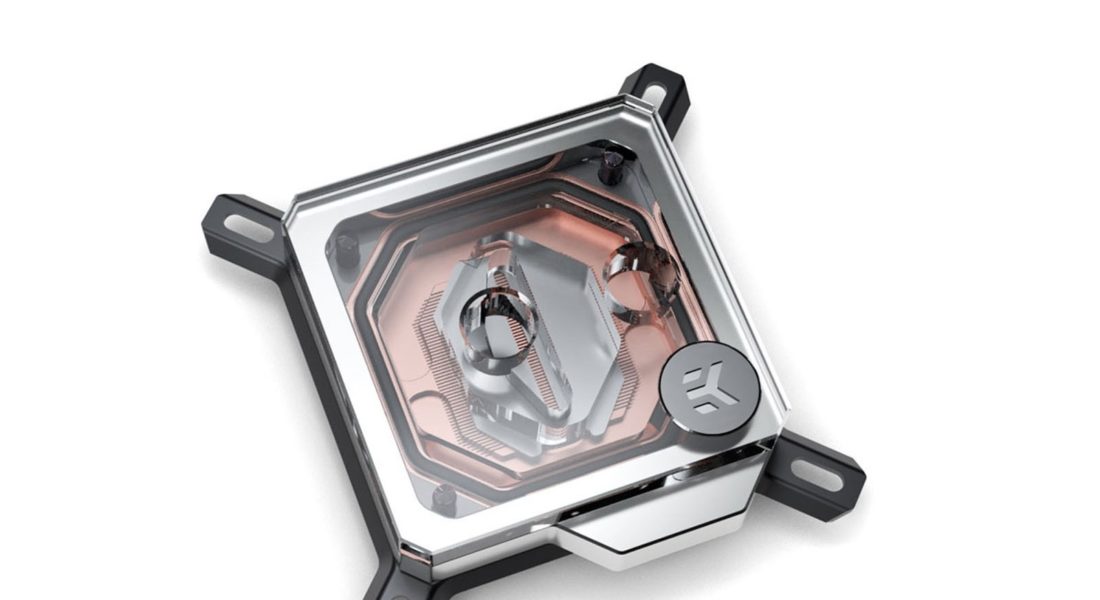 
EK Velocity is the new high-performance flagship premium quality CPU water block for modern Intel processors. It features a fresh design that will enable a vast number of variations and options for enthusiasts and demanding users as well!

The purest copper available on the market is used for the EK-Velocity cold plate which is precisely machined to a dense micro-fin structure. The contact surface itself is machine polished for a better contact with the CPU IHS. This version of the water block features a nickel-plated copper cold plate with a CNC machined high-quality glass like Acrylic top piece.

The new cooling engine is characterized by the top-integrated jet nozzle which is combined with a thicker jet plate allowing a more precise bow control. The simplified water block structure offers a more optimized coolant flow and easier maintenance, while the interchangeable thick jet plate ensures the best contact surface for mainstream and HEDT Intel platforms.

The block is equipped with a reinforced hold-down bracket, and the enclosed mounting kit includes all the necessary mounting screws, mounting springs, an Intel 115x backplate, rubber backplate gasket and a small tube of Thermal Grizzly Hydronaut high-performance thermal paste. The EK Velocity CPU water block features a universal mounting mechanism that offers error-preventing, tool-less installation supporting Intel LGA-115x and LGA-20xx sockets out of the box. The mounting screws are streamlined and are even smaller than before for an added aesthetical perfection.

Made in Slovenia – Europe! 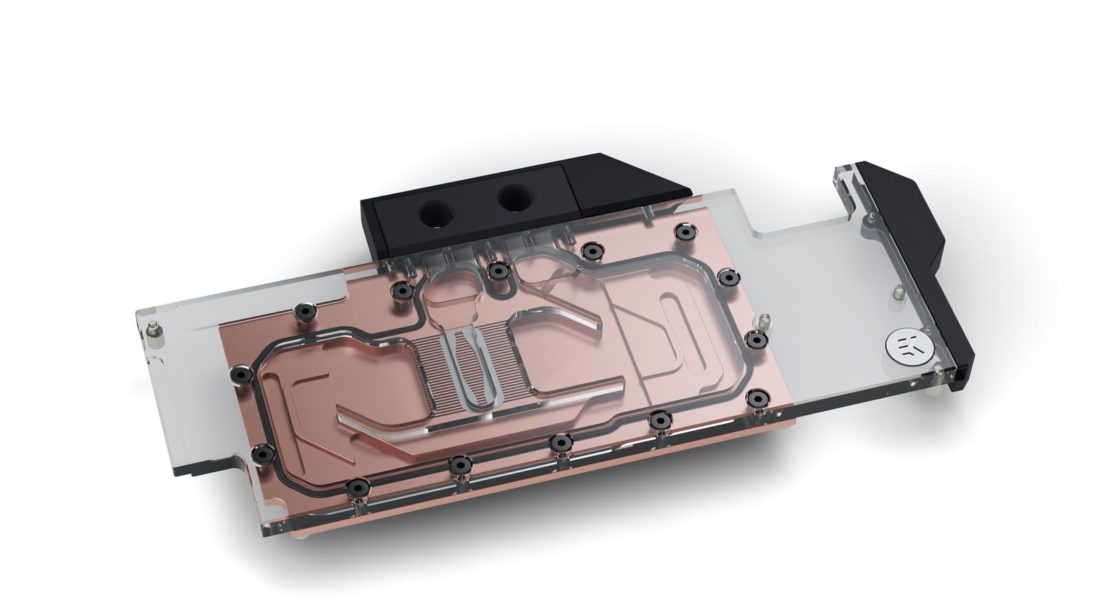 The EK Vector high-performance water block is specially designed for multiple NVIDIA® GeForce® RTX Turing based graphics cards. The water block itself uses the signature EK® single slot slim look, and it covers the entire PCB length. This sophisticated cooling solution will transform your beefy graphics card into a minimalistic, elegant piece of hardware. The block also features a unique aesthetic cover over the block Terminal which is designed to reveal the graphics card model, visible from the side.

This water block is compatible with all reference design GeForce RTX 20×0 based graphics cards, but as always, we recommend that you refer to the EK® Cooling Configurator for a precise compatibility match.

The water block directly cools the GPU, VRAM and the VRM (voltage regulation module) as cooling liquid is channeled directly over these critical areas. These newly developed water blocks feature a redesigned cooling engine that has a larger footprint compared to the previous generation of EK® Full Cover water blocks. This results in a larger surface area for heat transfer which increases the thermal performance of these water blocks.

The EK Vector Series water blocks use an Open Split-Flow cooling engine design which proved to be a superior solution for GPU water blocks. It is characterized by low hydraulic flow restriction, which means that it can be used with weaker water pumps, or pumps running on low-speed settings and still achieve top performance. The jet plate and fin structure geometry have been optimized to provide even flow distribution with minimal losses and optimal performances even when used in reversed water flow scenarios.

EK® recommends the purchase of a retention backplate which improves the aesthetics of your graphics cards, but also provides additional passive cooling to the GPU core and circuit board VRM section.

G1/4″ threaded fittings can be used on both sides of the terminal and for multiple GPU connectivity, please refer to our offer of GPU Terminals. The EK-Vector GPU water block terminal cover is not compatible with FC Terminal X and FC Terminal (Legacy) multi GPU connectivity bridges.

The NVIDIA® NVLink is compatible with this water block.

Made in Slovenia – Europe! 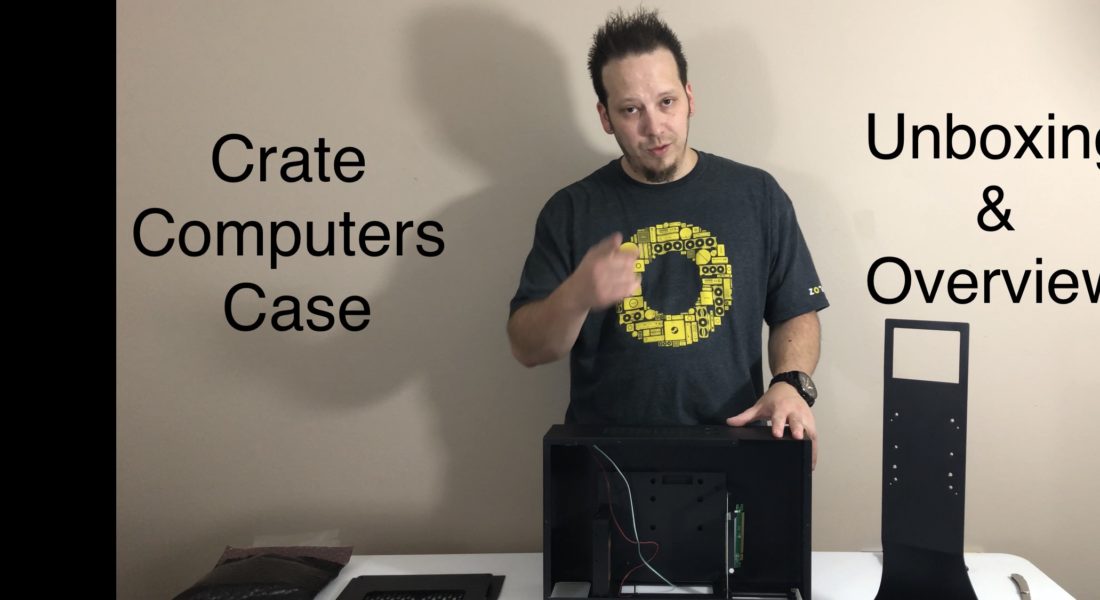 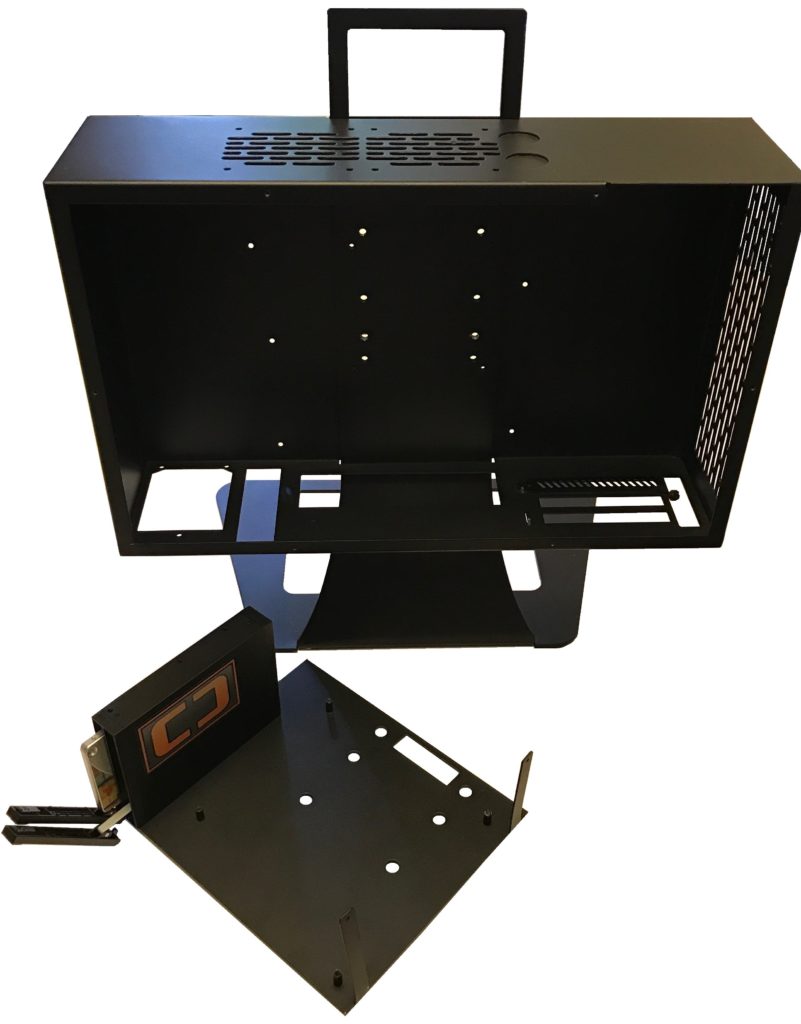 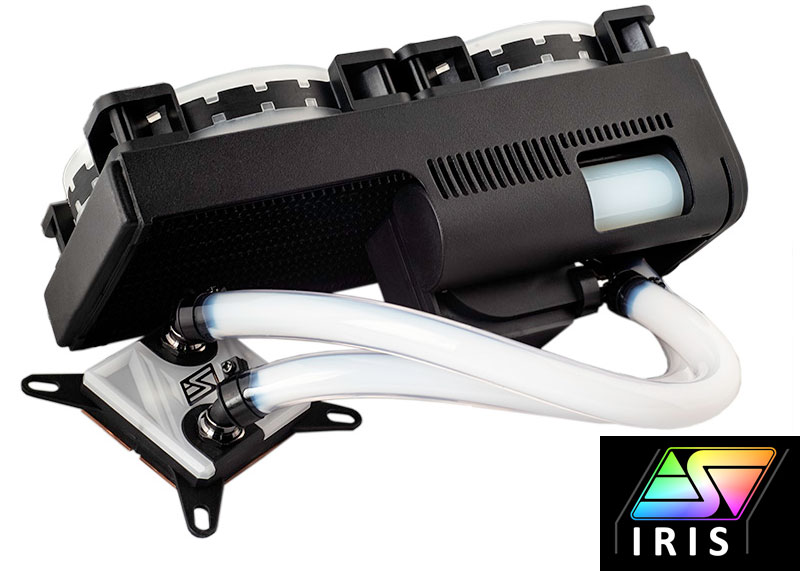 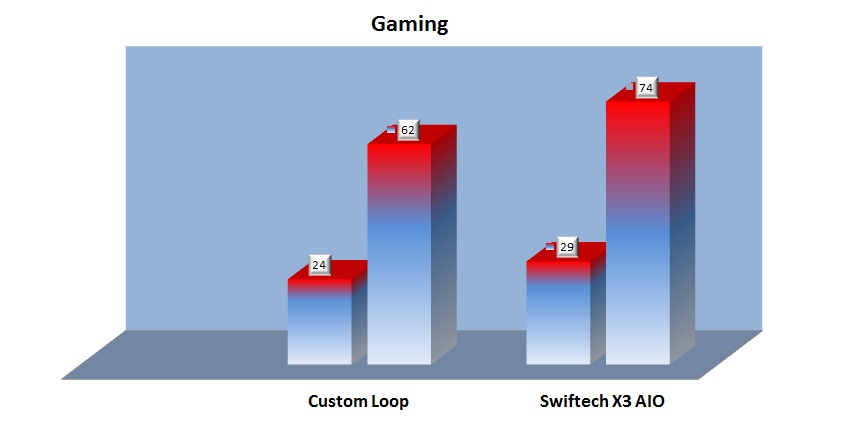 Our Gaming chart was derived from a 4 hour gaming session of PUBG with settings set to high, in which we repeated twice, and took the average temperatures from the two sessions. We performed this test both on our Custom Loop Cooling as denoted above, and the Swiftech Drive X3 AIO. All fans were set to max speed for both test setups and tests.

Firestrike was run three times consecutively and the average of the three runs were reported. We performed this test both on our Custom Loop Cooling as denoted above, and the Swiftech Drive X3 AIO. All fans were set to max speed for both test setups and tests.

Being that the Swiftech Drive X3 AIO that we tested was a 240mm version, which uses 2x120mm fans, it kept up fairly well with our full custom loop using a 360mm radiator and 3x120mm fans.

Swiftech is proud to announce our latest advances in All-in-one Liquid Cooling CPU cooler: Swiftech Drive X3 AIO CPU cooler. The new X3 AIO series has received a great number of improvements which are all detailed below.

Also, please note that all Swiftech products including a Liquid Cooling radiator released since Q3-2018 (July 2018) are now following a new sizing and naming convention. The number in the product name now is the result of the multiplication of the number of fans (per side) and the size of the fan. For example, our dual 120 mm AIO that used to be named “H220” are now named “H240”.

The Swiftech Drive X3 AIO CPU Cooler features aa fully redesigned patented radiator/reservoir/pump combo featuring a tempered DIY grade glass reservoir, and a leak-proof acrylic-free manifold design.
The new CPU waterblock, the Apogee™ SKF “LT”, which is based on the award winning Apogee SKF, Swiftech’s new flagship waterblock released in 2017. The apogee SKF “LT” features the exact same Skived Fins thermal engine. The waterblock housing features an acrylic-free design and 6x Swiftech IRIS addressable LED’s for endless customization. The retention hardware has been enhanced for an even easier and trouble-free installation, and it is compatible with all current desktop processors from Intel® and AMD. 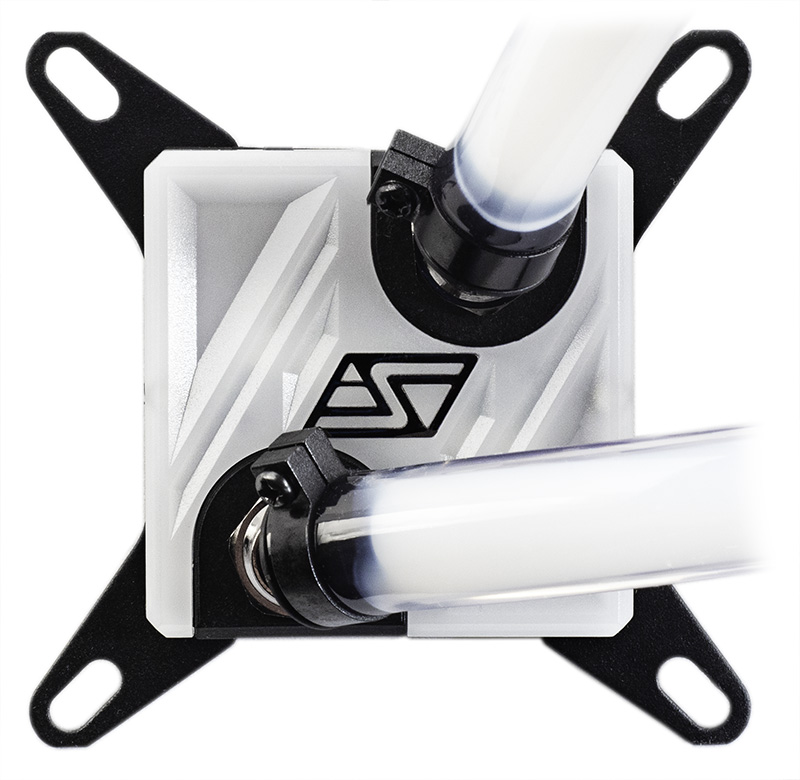 A clear departure from all other AIO’s: the use of maintenance free Mayhem ultra-clear tubing, providing the overall custom looks and feel of the product: now, you can clearly see that your system is liquid cooled! 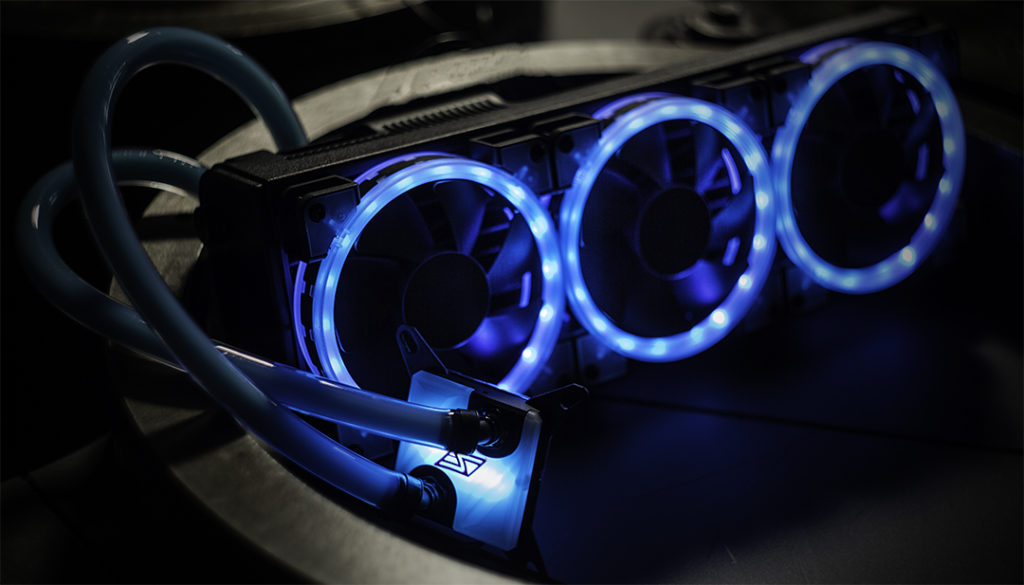 Along with the inclusion of red, blue and green Mayhem color dyes, Swiftech is also proud to announce that all X3 AIO CPU coolers ship with the best coolant on the market: the Mayhem Pastel White Nanofluid Coolant. 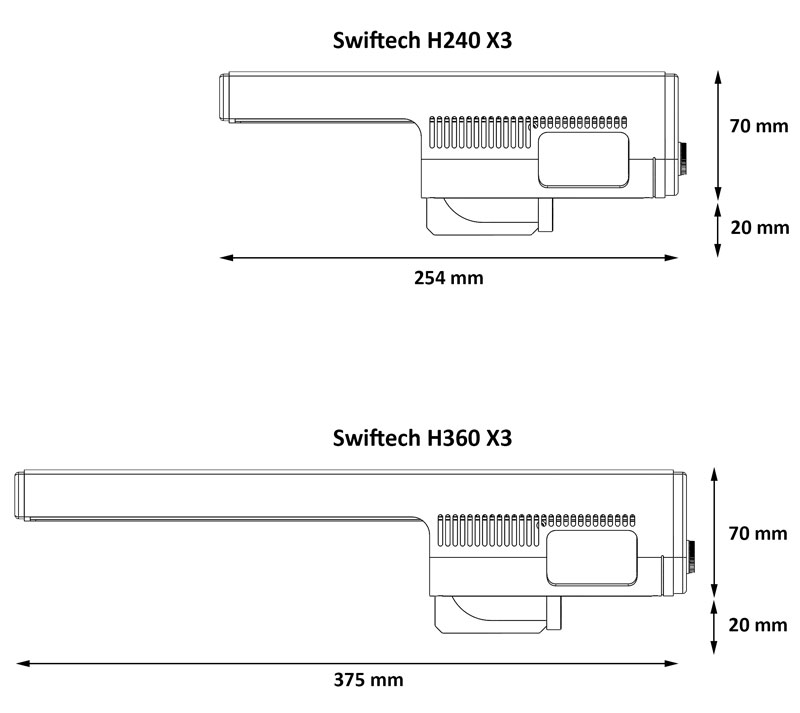 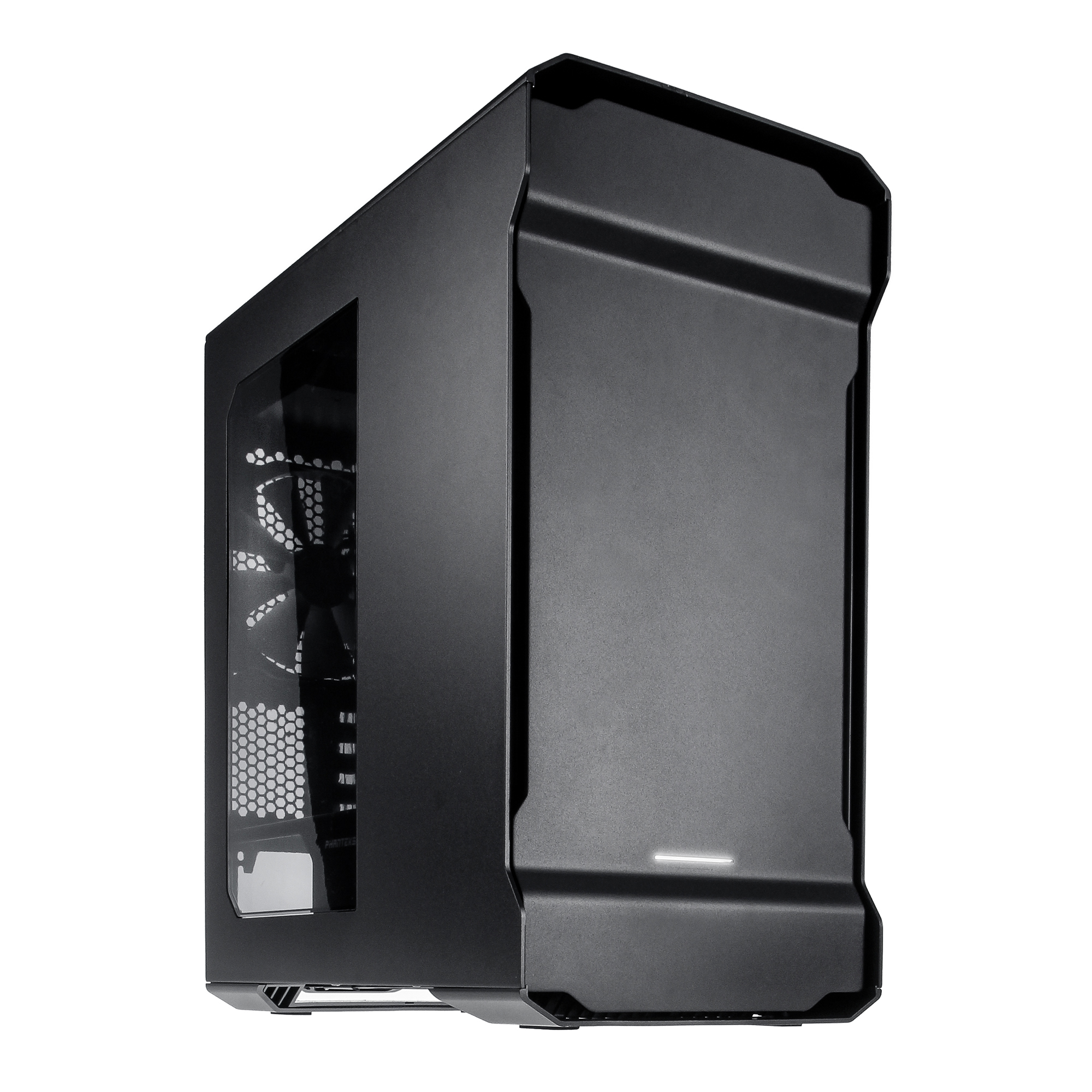 Since the release of the original Enthoo chassis, Phanteks have really lead the chassis design pack with their smart, stylish, and budget friendly cases. Today Phanteks are welcoming their latest and smallest case to the family in the form of the Phanteks Enthoo EVOLV ITX Micro Tower Chassis. 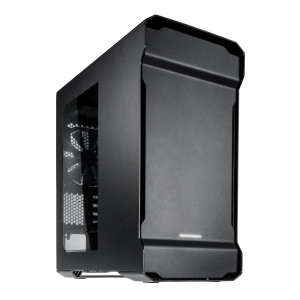 The Phanteks Enthoo EVOLV ITX Micro Tower Chassis will be available starting this month with a $79.99 US price tag. A full list of specs and photos can be found on the Enthoo EVOLV ITX product page. 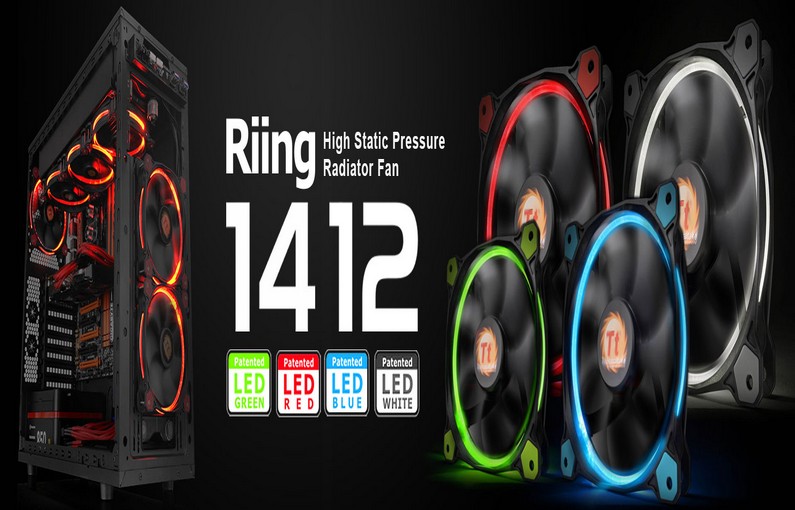 Earlier this month Thermaltake revealed their new range of liquid cooling radiators, so the introduction of the new Thermaltake Riing series of fans designed specifically for radiators seems only logical. Available in both 120mm and 140mm sizes, the Thermaltake Riing fans have a very “Tron” look to them, but also have the cooling potential to be a good addition to any chassis or water cooling system.

Custom designed for high-static pressure requirements of demanding applications such as radiators, the Concentrated Compression Blade (CCB) is engineered to focus the inner weaker circle of air outwards, allowing the outer section to pressurize and compress the air.

To achieve maximum static pressure in all applications, the wind blocker frame is designed to work with the Concentrated Compression Blade’s (CCB) pressure mechanism by directing airflow towards the middle section of the blade, thereby creating a compression effect and blocking any pressure from escaping. This reduces the blade’s noise and vibration, creating a perfect balance between power and sound.

The hydraulic bearing self-lubricates with a high quality, friction-reducing substance which lowers operating noise and improves efficiency. The seal cap prevents leakage of the lubricant, and improves the lifespan of the unit. The LNC (Low-Noise Cable) can reduce the noise level by 24% from 24.6dBA to 18.7dBA.

In-mold injection anti-vibration rubber pads provide hassle-free usage for 80% protection coverage, including all four corners. The LED lighting effect is visible from all sides and angles.

The full line up of Thermaltake Riing Radiator fans should be available any day now via Newegg with more distributors to follow. For more information and full specs checkout the Riings product page-

Watch us Live on Twitch